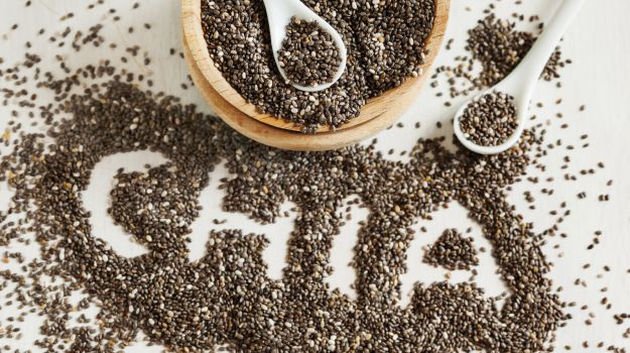 Chia seeds originally come from Central America. They are full of healthy ingredients and can be used in a variety of options as part of a balanced diet.

Superfood, remedy, vegan miracles, weight loss wonder – chia seeds are the trend and call both advocates and critics on the plan. Chia seeds contain many healthy ingredients, they are filling and very versatile. However, they are also quite expensive and similar benefits can be found in other foods such as linseed. Whether chia seeds enrich your muesli or yogurt, everyone has to decide for themselves if they want to include chia seeds into their diet. Here is some helpful information about chia seeds.

Origin of chia seeds
They already served as a basic food and medicine in the Mayan period. The seeds, whose name literally means “strong”, are oval-shaped and about one to two millimeters in size. They are available in black, black spotted and in white and grey. They count as oilseeds or pseudo-cereals and are gluten-free. The cultivation takes place in Central and South America and they are also being cultivated in Southeast Asia and Australia now.

Use of chia seeds
Chia seeds are popular especially in the vegan cuisine, because the small grains have a special power. They rapidly swell in liquid and form a stable gel. From a tablespoon of chia seeds and three tablespoons of water, a gel is formed within 10 minutes, which can replace an egg. In a cake, this gel replaces up to 50 percent of the amount of fat. Thus, baked goods obtain crispness and a resilient structure. In addition, chia seeds can solidify smoothies or jam, which then requires less sugar for gelling. Vegan puddings from chia and vegetable milk are also prepared quickly. Ask your dietitian or nutritionist to include healthy recipe with chia seeds into your diet plan.
Some athletes swear by the power of iskiate, a drink made of Chia, water, lemon juice and honey. Originally from the tribe of the Tamahumara from the north of Mexico, whose relatives are famous as long distance runners.

Chia seeds in the trade
In Dubai chia seeds are sold in almost every supermarket and there are many products on the market that contain chia seeds. For example, there are chia seeds in bread, supplements for muesli or cereals. The special properties of the chia seeds can also act as thickeners, emulsifiers or stabilizers in the food industry.

Chia seeds as a nutrient supplier
These tiny seeds have many valuable ingredients. They contain more protein than grains, while delivering dietary fiber and high-quality polyunsaturated fatty acids. They also supply the body with vitamins, minerals and phytochemicals. Chia seeds primarily provide phytochemicals with antioxidative benefits. Such plants can stop free radicals in the body and thus protect the cells from damage. The superfood does not only complement the vegan cuisine, but the “strong” seeds also enrich a balanced mixed diet.

Can the consumption of chia seeds have undesirable effects?
Besides the valuable components and possible positive effects of chia seeds, side effects can also be thinkable. The high proportion of dietary fiber can lead to problems in the event of sudden changes in diet. In order to prevent flatulence and possibly diarrhea, the intake of high-fiber foods should be increased gradually step by step. At the same time, it is important to drink a lot of liquid, so that the fiber can swell.
The proteins from chia seeds can theoretically cause allergic reactions. So far, however, there is no evidence of such effects. Should you suspect that the consumption of chia seeds causes any type of intolerance, please speak to your dietitian or nutritionist.

Are there studies on the health effects of chia seeds?
Chia seeds can lower the blood pressure in some hypertensive patients. They also show positive effects in type II diabetes by reducing the risk of cardiovascular disease. Chia seeds increase the stool volume and accelerate the digestion time, which can be helpful in case of constipation. The swollen chia seed increases the volume of a meal, thus, contribute to a longer saturation. Dietitians and nutritionist agree that a supportive effect on losing weight has not yet been confirmed, but chia seeds can still be part of a healthy weight loss diet plan because of their beneficial effects on your digestive and general health.

Matt Bryant
13:52 22 Aug 21
I was looking to start keto diet and after few exploratory calls decided to go with Beyond Nutrition, as they seemed to have good amount of experience with this diet. I had several sessions with miss Eva and she made personalized keto recommendations that I was able apply right away. Very happy with results so far.read more
Beatrice
15:38 16 May 21
My partner and I sought out Beyond Nutrition in October of 2020 as we wanted to learn how to eat more nutritiously. We specifically requested consultations with Katharina Elbracht as she specializes in vegan nutrition. We were first asked to do some blood work to make sure all our markers were in order, and then scheduled regular sessions where we went through both general and specific eating and lifestyle advice which includes what vitamins to take, lifestyle habits to implement to better reach our goals, portion control, and quality of food. During every follow-up consultation we would analyze the previous week/s in detail and discuss what went well and what we can improve. Katharina also provided us with meal recipes which we have really enjoyed and they're easy to make. It's been a great experience so far and we've learned so much.read more
Eric Smith
05:34 12 Dec 18
Having had to have medical care around the country, this place showed me that it can be done well......read more
Maajid el-Salim
06:26 11 Dec 18
Finally got great care in an efficient manor
Chris Dott
11:16 08 Dec 18
Amazing staff! Everyone was really helpful & friendly. Thank you, so much!
Mayyaada -
14:49 05 Dec 18
Best greate care.
Huda al-Hana
12:23 05 Dec 18
the best-no joke.
Eric Smith
06:13 05 Dec 18
Having had to have medical care around the country, this place showed me that it can be done well....read more
Maajid el-Salim
16:02 04 Dec 18
Finally got great care in an efficient manor! .
Faraz Kohari
10:27 10 Oct 18
Had an extremely helpful sports massage session. Definitely helped.
Eric Smith
14:18 08 Oct 18
Having had to have medical care around the country, this place showed me that it can be done well.
Sidqi
17:27 08 Sep 18
Great place .. these folks are some of the best .
Digital World
15:20 25 Aug 18
Beyond Expectations. The nursing staff was above and beyond fantastic!! So professional and gentle in every aspect!read more
Marzooq
06:22 10 Aug 18
Good clinic. Saw Eva Anelauskas for sports nutrition. She did a great diet plan I can follow easily, even though I dont cook a lot at home. Thanks!read more
Jing BABU
15:15 05 Mar 18
I went and have massage by Ms. Arlyn Castro Hortelano..Massage was amazing..She knows every points and parts to concentrate..i felt so relaxed , reborn and very light..she even gave me wonderful advices about my muscles and how to relax them.. I am so sure i am in goods hands with her..i cant stop and just keep coming back..Highly recommend Ms.Arlyn..?????read more
Wieske Heinen
17:55 07 Jan 18
I had a massage at this clinic and it was a wonderful experience. I had massages before and I usually have a huge headache afterwards but this time I felt great and didn’t have any headache at all. The massage therapist is very skilled and kind. Service in the clinic is also really great. Would certainly recommend this to my friends.read more
Marieke Geurts
17:34 05 Dec 17
I had a very positive experience at Beyond Nutrition. Setting up appointments was fast and easy, and the clinic atmosphere and staff were pleasant. The nutritional consultations were very helpful, particularly because of the blood tests. Overall highly recommended.read more
Rawia Hamadeh
11:35 20 Nov 17
Beyond nutrition are also beyond expectations and standards! The team is amazing! They are so professional and friendly! I love going there for nutritional consultation, blood tests, massages and physiotherapy. Katharina, the manager, is my favorite person there! I book my nutritional consultation with her. She is well knowledgeable about her field and she is really accommodating to her clients. I highly recommend this place! They have so much more to offer, you just have to go and try their services ?read more
divia ahuja
14:36 09 Aug 17
I have had one of the best experiences with Beyond Nutrition. Ms. Nadia and Ms. Kathy are very professional and always helpful. Due to my work ethic I am not very good with following a schedule, but they are very accommodating and we were able to work out a schedule that would fit around my life, and not for my life to change (significantly) around the eating and exercise regimen. I would really recommend them to anyone who is looking to get healthy or just to get a good perspective on what they can change to be a better self :DP.S. Thanks to the nurse who recommended I get my cholesterol and lipids checked, never would have known, maybe until too late.read more
Next Reviews Write a review